We are constantly seeing new mobile devices being released, just as you get your hands on a new handset someone brings out something else the following day. Today we have news of another new handset that is on its way as a dual screen T-Mobile LG shows up in the wild, and could be the Flip II.

Chris Hall of Pocket-lint is reporting the handset could be a US only device and may be called the Flip II. In the image which you can see below next to the QWERTY keyboard is another touchscreen. It has some shortcuts which will allow launching a variety of applications. Sometime was spent with the device and it was found to be a heavy unit.

The handset was also found to be wider than the Milestone 2, and have some similarities with the LG Quantum and Optimus 7Q. It has four touch controls sitting underneath the screen just like the Optimus 2X and Black. Camera wise it is not known how many megapixels it has, but it has a LED flash. 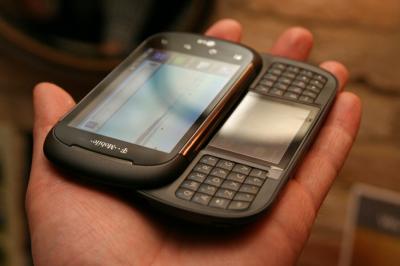 When the device was closed it was found to have some unwelcome movement, so hopefully some enhancements will be made before it becomes available. A recent T-Mobile US document which was leaked mentioned a couple of upcoming LG handsets including the Flip II. Use the link above to see more images of the handset.