You may remember a few days ago, when an image of the Motorola Droid X ‘supposedly’ running the latest Android 2.2 Froyo software appeared. However, that image didn’t show the actual phone so it could have been fake – until now.

As reported from Phandroid, Engadget has got their hands on another screenshot via their tipster, which shows the Droid X running Android 2.2 Froyo.

Unlike the previous screenshot though, this one shows the actual Droid X handset in full view, meaning that the chances of this being real are significantly higher.

Of course, there is always the chance that this could be photoshopped, but with all the Droid X Froyo rumors swirling around lately – we’d like to think otherwise.

Take a look at the screenshot below, and let us know your thoughts on it. 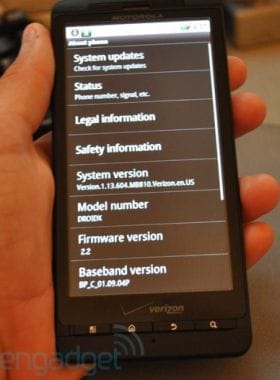