If you have already decided to pick up the upcoming Droid RAZR from Motorola ahead of the Galaxy Nexus which is also on Verizon, you’ll be pleased to know that we have a useful infographic to show you giving you a key runthrough of specs for the device.

In a matter of hours, you’ll be able to pre-order your Droid RAZR for $299 and reserve one for launch day, which should be happening on or around the November 10 mark. The Droid RAZR is going to be Motorola’s best Android phone to date by far, and many of you even believe that it can go on to top the Galaxy Nexus as well.

The guys over at Droid-Life have gotten hold of a Verizon graphic displaying key specs of the device, and it once again reminds us that this is going to be the most durable Android handset on the planet, thanks to features such as Kevlar fiber materials on the back, a water-repellant nanocoating and also the popular Gorilla Glass material for the display screen, which won’t be featured on the Galaxy Nexus by the way.

Other specs include an 8MP camera on the back with the ability to shoot 1080p HD, a front-facing HD camera and a 4.3-inch Super AMOLED display screen to enjoy everything on. The RAZR will also come with MicroSD support for extra memory, another feature that won’t be featured on the Galaxy Nexus. Having said that, the Nexus will make use of Google’s iCloud, so this definitely isn’t a disaster situation for sure.

We recently told you that the Droid RAZR was rumored to be priced at $649 at full retail price, and further Verizon documents obtained by Droid-Life confirms once again that $649 will be the price off-contract for the device – pretty high you may think, especially when you’ll have to pay for expensive data bundles on top of this.

Are you picking up the Droid RAZR rather than the Nexus? Will you go for a standard two-year deal or are you prepared to fork out $650 for an off-contract handset? 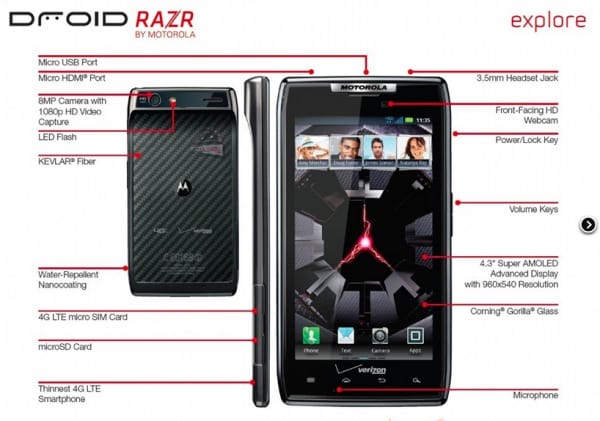