Following on from the official announcement and unveiling of the Motorola Droid Pro handset for Verizon Wireless, we now have one of the first hands-on reports for you to take a look at.

It comes to us courtesy of Engadget, who have managed to capture some hands-on images of the device, as well as give u their first impressions on the Android 2.2 candybar handset.

One of our readers has called this handset a ‘HTC ripoff’, but personally we think it looks a lot more like a BlackBerry device which RIM would release. The QWERTY keyboard is separated away from the display screen, so much that the average consumer wouldn’t be able to tell the difference between a Motorola Droid and a BlackBerry handset.

Other than the four touchscreen buttons on the bottom of the display screen, there isn’t much to suggest that this is a Droid handset, unlike the Droid X and Droid Incredible which carry distinct red markings.

As unusual as the Droid Pro looks, we still think it will be a hit, just because of the ‘Droid’ branding alone. The specs are also decent enough too – Android 2.2 Froyo and a 1Ghz chip are enough to satisfy most users these days.

Take a look at the hands-on pictures over at Engadget and let us know your thoughts on the design. Do you think it looks like a BlackBerry? 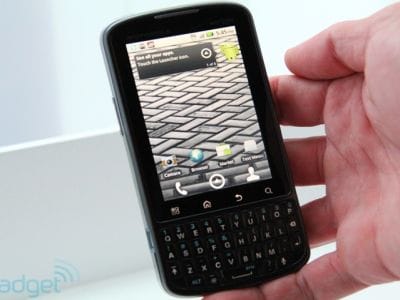