There is a lot of anticipation on HTC’s next major upgrade to their Sense UI, HTC’s own customized version of Android that features in the majority of their smartphone and tablet products. Sense 5 is coming sometime this year, but so far we haven’t had a confirmation of which device will be first to receive the update or perhaps more importantly, if Sense 5 will be supported for existing HTC smartphones.

The elusive HTC M7 phone could be the device that ships with Sense 5 out of the box, but an fresh image surfacing from China appears to suggest that Sense 5 could also be possible on older handsets as well – or in this case, the still new Droid DNA on Verizon Wireless.

Hold on a minute, as you may be thinking – another China Sense 5 leak? It was only at the start of January that we shared images of the HTC M7 running on Sense 5, images which originated from the Chinese equivalent of Twitter, Weibo. Now we have another image to show you coming from Weibo again, this time showing the Droid DNA as the device in question.

It’s worth pointing out however that the Weibo link has now expired, meaning that it is either legitimate and HTC wants to remove all access to the image, or it has just been exposed as your bog standard Photoshop image. It goes without saying that it would be great if newer HTC handsets are getting an update to Sense 5 and if that is the case then the Droid DNA surely has to be on the list. 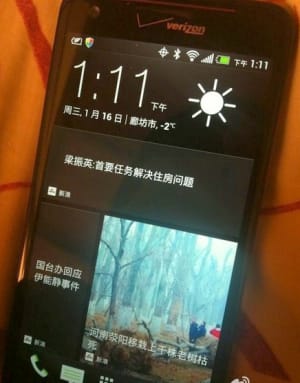 From feedback we’ve seen though, a lot of you are not liking the new Sense 5 features too much. Take a look at the image above and let us know your thoughts on it, assuming it is genuine.