It looks as though the Droid Bionic revamp is now starting to take shape, as we now have details on what it could look like and a few upgrade changes. Motorola has delayed the handset’s release for some time now and it looks as though it was not down to the processor — although this could still be a possibility.

You will notice that we still have the old photos up, as this is for legal reasons. However, if you head over to PhoneHK you will see a host of images of what the revamped Droid Bionic could look like. So we know that the display will go from 4.3-inches to a 4.5-inch qHD display.

Also we had assumed that Motorola would be using Froyo, but it looks as though Google Android Gingerbread will be the mobile OS of choice instead. But that is not the most interesting bit, it looks as though it is going down the Atrix route and will have a lapdock or whatever you would like to call it. 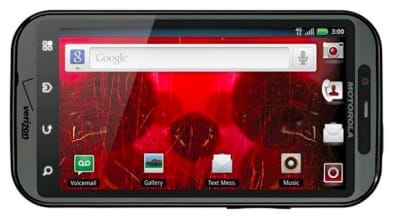 One further detail is the fact that the rubberized back looks to have gone; in its place is a more traditional bit of plastic. We still do not know how long it will be before Moto finally get round to releasing the Bionic, but they need to be quick before consumers give up on it and start thinking about the Droid 3 instead.