If you have been keeping a close eye on developments for the Motorola Droid Bionic smartphone release on Verizon, you’ll know that it has been nothing short of a mind boggling adventure for consumers, although it looks like the release date puzzle may finally be solved next month.

As many of you will probably be aware, we have been keeping you up to date with release developments for the handset, since it’s easily the most anticipated Android handset to date and one which a lot of you are thinking of picking up.

Back to business though, as the last we heard about this device, was some conflicting reports that the Bionic has been delayed until September, as Verizon look to release it alongside the 4G LTE version of the Motorola Xoom. As most of you know, Motorola shipped their Xoom out a few months ago, with the promise that free 4G LTE upgrades would be coming sometime later on in the year. This now looks to happen in September, and it may go head to head with a third generation iPad device if Apple decides to release it this year.

Having digested that information that consumers may have to wait until September to pick up the Bionic, you can imagine our surprise when we heard today that the handset is in fact destined to release in a weeks time, on August 4th to be exact. We mentioned about this possible date in our previous article here, and it looks like this could be the solid date that Verizon has in their diaries for the launch.

A screenshot obtained by Droid-Life has once again backed up reports that the handset will be launching on August 4th. Verizon stores will actually be getting handsets on August 1st, so we imagine the other two days will be spent getting to grips with the handset, making sure employees are clued up with the ins and outs of the Bionic by the time August 4th arrives. 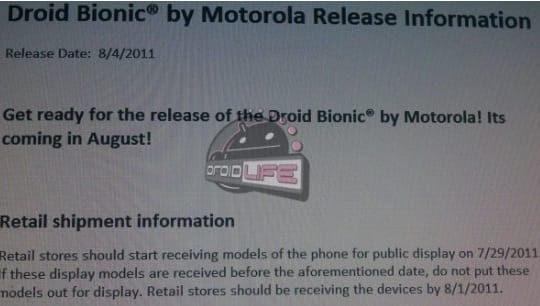 It wouldn’t be surprising if that date changes once again before the end of the week, but for the moment – Thursday August 4th is the date that you should be writing down in your diaries. Have we finally seen the end of the Droid Bionic release mystery? We really hope so, because Verizon need to start getting people excited about the Bionic before everyone jumps ship to another handset such as the iPhone 5, or even other Android handsets such as the Photon 4G on Sprint, the Nexus 4G and the elusive Motorola Dinara.