Everyone is pulling their hair out on whether their Android smartphone will be updated to a new version of Android 4.1 Jelly Bean, but for Droid Bionic owners, there is a different celebration going on – the long awaited release of Android Ice Cream Sandwich.

Motorola may have taken their time to deliver on this highly anticipated software update, but patient owners won’t care about that as the decision to hold off from the likes of the Galaxy Nexus, Galaxy S3 and Galaxy Note 2 appears to be justified – for now.

Word has spread that an OTA update is rolling out, identified as build 6.7.246 and brings the Droid Bionic to the updated firmware of 4.0.4 Ice Cream Sandwich. Some of you may have already received your update last week, but we understand that a lot of you have not received anything yet – but you should have now had the notification pop up over the last 24 hours.

If you take a quick look at our previous coverage on the update delay here, you’ll see that there is over one hundred comments from Droid Bionic owners, with most complaining that they still haven’t received their update, despite Motorola’s reassurances. The general rollout date was considered to be October 19th, but as with most Android updates these days, consumers are often left frustrated with the irritating nature of updates appearing in some locations and nothing in others. 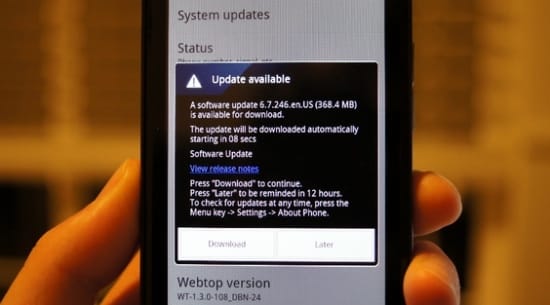 The above image from Droid-Life suggests that the update is definitely happening though, so head to your settings page now via about phone>system updates and with a bit of luck, you’ll be able to push the Ice Cream Sandwich update manually. All this drama over an outdated version of Android, it will be interesting a few months down the line to see if we have the same problems arise regarding a Jelly Bean update.

What is the situation at the moment for you, in your area? Did you receive a notification through the night to update to the build number mentioned above. Congratulations if you have, fingers crossed if you are still waiting.