As we move ever closer towards the release of the highly anticipated Motorola Droid Bionic smartphone on Verizon, we have one piece of fresh information which may interest those of you who are planning to root the Bionic as soon as it is available.

Earlier on we gave you information on the official user manual for the handset after it showed up courtesy of some listings on the FCC website. As well as confirming specs that most of you should know about, the manual also gives users the perfect opportunity to see what the device is capable of, and also see how the navigation handles on the device to see if there’s any drastic changes from previous Motorola handsets like the Droid X.

What you probably won’t have seen is the following screenshot, which shows a custom interface on the Droid Bionic, sporting custom touchscreen icons as well which you will want to take a look at, thanks to MyeGarageSale. As far as we know, this appears to be a test handset, with the screenshot coming courtesy of a developer who is already in possession of a Droid Bionic. 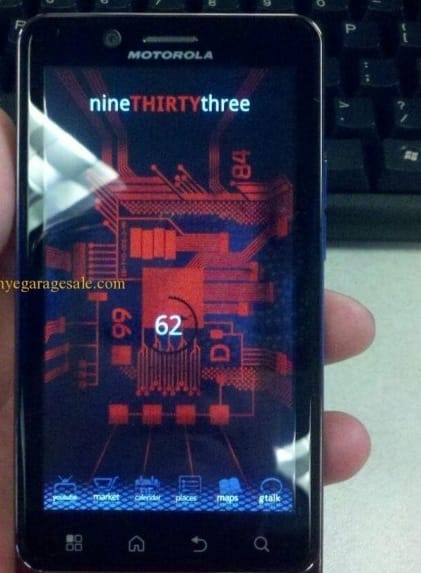 Those familar to the Android modding scene will recognise those custom icons at the bottom as a ADW-style launcher interface, which means that rather than just have widgets scattered all over the Droid Bionic homepage, you’ll be able to swap and exchange apps into the launcher at the bottom for quick easy access, giving you a quick-fire alternative to the hardware buttons featured below the icons.

We’re guessing that this interface won’t be available out of the box when the Bionic finally comes available next month, so we’re interested in seeing just how many of you are planning to root your device at the first opportunity so you can take advantage of cool features like this. Motorola seem to be pretty lenient on those who opt to root their devices these days, so it’s definitely a path to consider once you get your handset.

Will you root your Droid Bionic or not? Give us reasons for your choices.