Earlier this year we saw a few Droid Bionic benchmark videos that apparently gave a little insight into what this Motorola phone will be like, although these tests were both early and skeptical. Yesterday we wondered if the official Droid Bionic release date would tempt iPhone 5 buyers, and today we look at a new video claiming insight into the power of Droid Bionic.

You can see the video below this article, which is a little controversial to some people. The hands-on with Droid Bionic shows a benchmark by way of Quadrant. This is known to not equal real world performance but does give you a little idea of what to expect from the Droid Bionic.

The Motorola Droid 3 has the same processor as the Bionic, and the GPU is pretty much the same found on the Samsung Galaxy S, although the clock speed is a lot higher. This is needed especially considering the need to push content onto a qHD 960Ã—540 display.

Some potential buyers feel that the Droid Bionic specs are lacking, and that when considering the speed that hardware is accelerating on mobile devices, why should the Bionic include an old GPU with a higher clock speed? It’s true that a better GPU would have made the Bionic so much more, but do you think it could stop you buying?

With most people finding the Quadrant benchmark results a joke, you may want to take a closer look at the Droid 3, which includes the same processor as the Bionic. Whatever you make of the benchmark video below, it’s safe to assume that the GPU is nothing special. 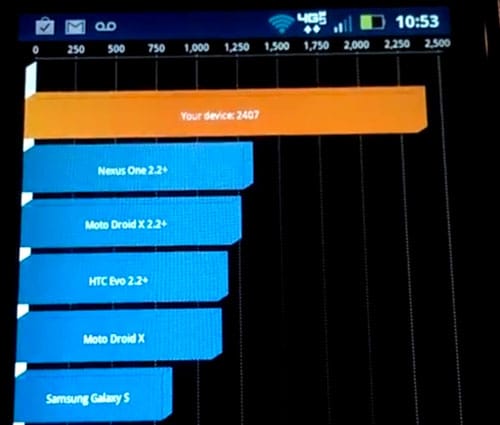 We’re now just two days away from the Droid Bionic release date. What does that mean to you?