If you live in the UK and would like to own something different to drive around in, we have some interesting news for you. The Goodwood Festival of Speed is currently taking place, and it is here that the news was announced that drivers in the UK are to get their own Chevrolet Camaro.

It has taken a while for the American muscle car to find its way over the pond onto UK shores, but according to an article on PistonHeads.com it will be available at the beginning of next year. For the spec of the car pricing is pretty competitive as the coupe starts at £34,995, and £39,995 will buy you the convertible.

The famous British weather may see many deciding on the coupe, but whichever one you choose it will be powered by a lovely 6.2-litre V8 which produces 426bhp. There is one problem though as it will be only available in left-hand drive only.

The model has been available in the US since 2009 and sold over 200,000 units, but there was a delay with it coming to Europe because of a few problems such as the US style rear light units. These don’t have separate turn signals and have brake lights which double as them.

All of the UK models will be high-spec and come with twenty inch alloy wheels and Brembo performance brakes. You will also find a full leather interior, power adjustable driver’s seat, nine speaker audio system by Boston Acoustics, rear parking sensors, and Bluetooth. There will be other optional extra’s available such as bonnet stripes, sunroof, automatic gearbox, and premium color finishes.

If you interested and live in the UK you can register by ringing free on 0800 666222. The latest installment of the Transformers movies Dark of the Moon was recently released, and consumers around the world can now get hold of their own Bumblebee. The Special Edition Camaro Coupe will be released in the US, South America, Canada, China, Japan, The Middle East, and Europe.

The link up with the series of films has helped make the Camaro the best selling sports car in the US, and brought back consumers to Chevrolet showrooms according to an article on USA Today by Chris Woodyard.

If you want your own Bumblebee it is being offered for an extra $3,000 package on the 2LT and 2SS models. You get the Rally Yellow paint work and a whole host of other features. These include the black rally stripes which run the length of the Camaro, 20-inch black wheels with performance tires, Autobot Shield logos, and much more.

If you live in the UK will you consider the Chevrolet Camaro? 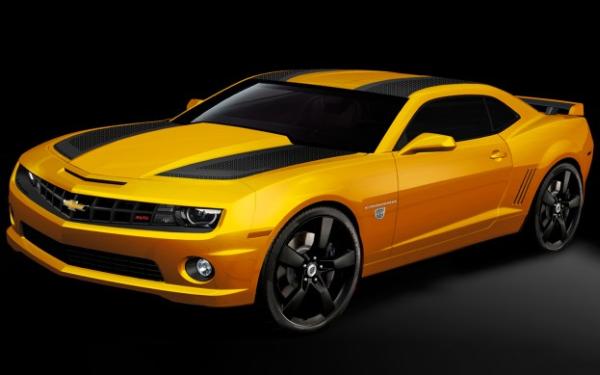