We have another update to bring you now on the Driveclub PS Edition release date status. It has been months since we found out the initial delay of the game and now it looks like the free version of Driveclub is still some time away from releasing.

Just to recap, the PS Plus Edition of Driveclub was originally supposed to launch with the main version at the start of October 2014.

However, Sony stepped in to announce at the end of October that the PS Plus version had been delayed until further notice – which was obviously disappointing to everyone.

With no sign of the game over Christmas, fans were then hoping that January would be the time when we would see it finally available to download. 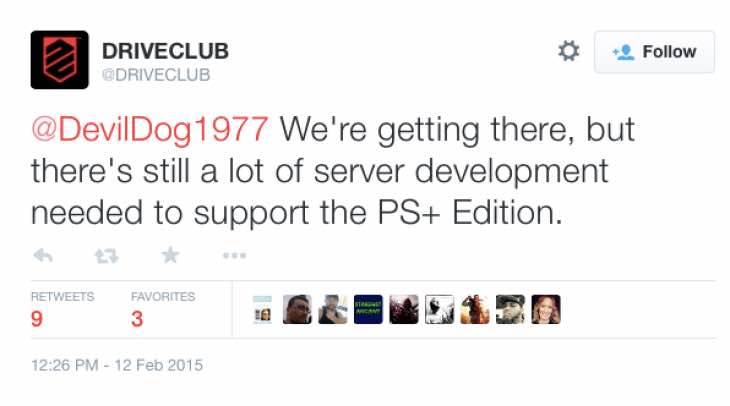 Jump back to mid February and now we have the latest update on the game. Above is a Tweet left a few days ago by the Driveclub team who now say that the game needs ‘server development’ to support the PS Plus Edition.

Does that imply it’s due to Sony’s PSN servers on why we haven’t seen Driveclub yet? Right now, the full version of Driveclub appears to be running very smoothly so we can understand why some are scratching their heads over this.

We’re heading into six months since Driveclub on PS Plus was due to be out – does this bother you or have you now moved on? Give us your thoughts on the ‘server development’ comment from Evolution Studios – is PSN to blame?