We have just had Sony reveal the PlayStation Plus February lineup for PS4 and PS3. While we knew we would get two games for free on PS4, others were secretly hoping that February would be the month when the DriveClub PS Plus Edition release date would finally be live.

Unfortunately though, it looks like you are going to be waiting even longer for the free version of Driveclub. March is now the next target and hopefully Evolution will be ready to launch the game once and for all, now that the problems with the full version are well and truly fixed.

In the meantime though, we can see that social media is getting heated at the moment. Emotions are boiling over from some who can’t understand what is taking so long. 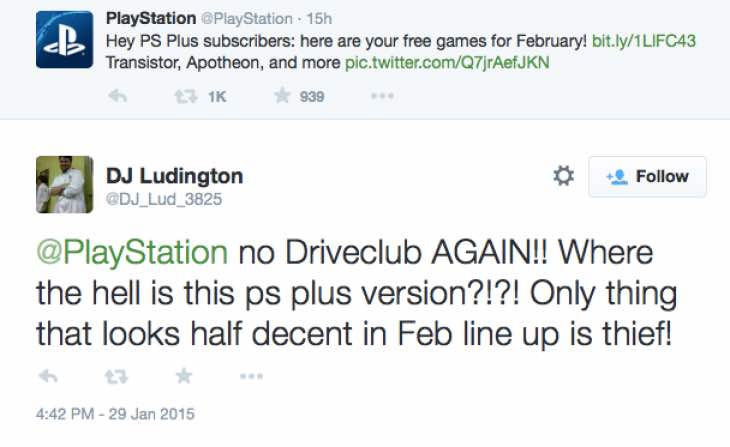 Evolution never said that the game would be ready in February though, but that hasn’t stopped some gamers from expecting it considering it has already been a few months since the initial delay.

The last we heard from the developer regarding the PS Plus edition was on January 28, when Evolution shared the following reply to a fan on their Facebook page.

When asked when the PS Plus Edition would be out, Evolution replied: “We’re still hard at work upgrading & preparing the servers to make this possible.”

While it is obviously disappointing that the game isn’t ready, we should note that Evolution has been actively responding to most questions on the status without any delays – how many developers can you say the same thing about?

When Driveclub is ready for PS Plus, it will be out. Let us know your thoughts on the PS Plus lineup for February and if you were also secretly hoping that Driveclub would be included in the mix.