We are almost at the mid-way point of January and still there has been no solid update on the status of the Driveclub PS Plus Edition release date, which PS4 owners are desperately waiting for.

It has become a sad state of affairs truth be told, although in realistic terms the game should only release when it is fully ready. The fact that we have heard nothing for weeks from the developer suggests that it still simply isn’t ready.

There hasn’t been an update since Christmas on the status of the Driveclub free version release date, but hopefully it won’t be long until Evolution can provide the next update for fans.

Until then though, we can see that comments are pouring in from impatient fans who are still demanding answers. We’ve spotted that just moments ago, game director Paul Rustchynsky has shared the following reply to one Twitter user who was asking for an update. 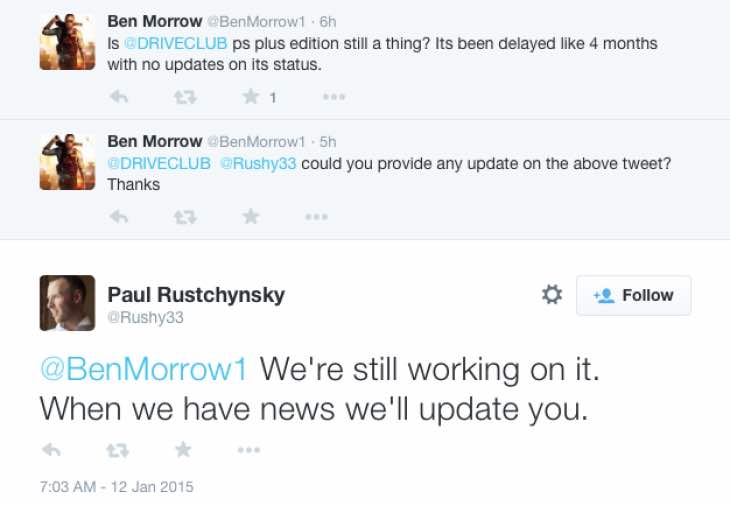 As we presumed, Driveclub PS Plus Edition is still not ready. Is it now too late to consider the game coming out for February’s PS Plus update, or are we looking at a release further on down the year?

The good thing to note is that it looks like Evolution has managed to fix the initial launch problems that they had with the main game. Many who are playing the game now are mostly happy with the progress being made, which is obviously great to see.

Are you still waiting for the free version of Driveclub that was promised last year? Give us your thoughts on the continued wait – are you ok to hold on for as long as it takes?