Those of you that have been gaming since the age of the SNES will appreciate the progress which Nintendo’s, Mario Kart has made since then. At the time it was one of the most imaginative and fun games ever developed, as well as being one of the best games on the console. As the consoles have improved so too has the game and it is still now one of the best racing games available despite not being on all consoles.

It seems Activision intend to take full advantage of the fact that Mario Kart is only available to Nintendo consoles as they have teamed up with DreamWorks and developed a very similar racing game called DreamWorks Super Star Kartz. Like Mario Kart it features an array of characters, only these ones all feature in the DreamWorks movies.

According to Eurogamer, there are a total of 14 characters available to select from the likes of movies such as Monsters vs. Aliens, Madagascar, How to Train Your Dragon and Shrek. The Super Star Kartz will also feature a variety of weapons as you would get in Mario Kart, designed to help out-wit opponents, as well as ‘awesome’ tricks and stunts. It also includes three game modes; Time Trial, Circuit and Battle, again very similar to the modes you’d expect to find in Mario Kart.

There was no mention of the online mode in Eurogamer’s source, though there is a multi-player mode available with split-screen for up to four people. Apparently the game is expected to hit the market this autumn, which is fast considering we’re only just hearing about it, and it will be available across all platforms. Check out the link above for more screenshots from the upcoming Activision title.

What do you think of DreamWorks Super Star Kartz so far? Will you be getting it? 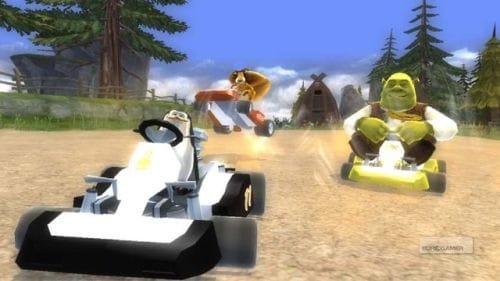