In a surprise turn of events, it looks like Bioware is ready to launch the first Dragon Age Inquisition DLC for single-player this week.

It’s surprising as there hasn’t been any build-up to this content whatsoever and it has taken players by shock. Even more so, for PS4 players who are just finding out for the first time that they won’t be able to play it with everyone else.

This is because EA and Microsoft has signed off on another exclusive deal if you haven’t heard and it means that the Dragon Age Inquisition DLC ‘Jaws of Hakkon’ will be available first only on Xbox One and PC. 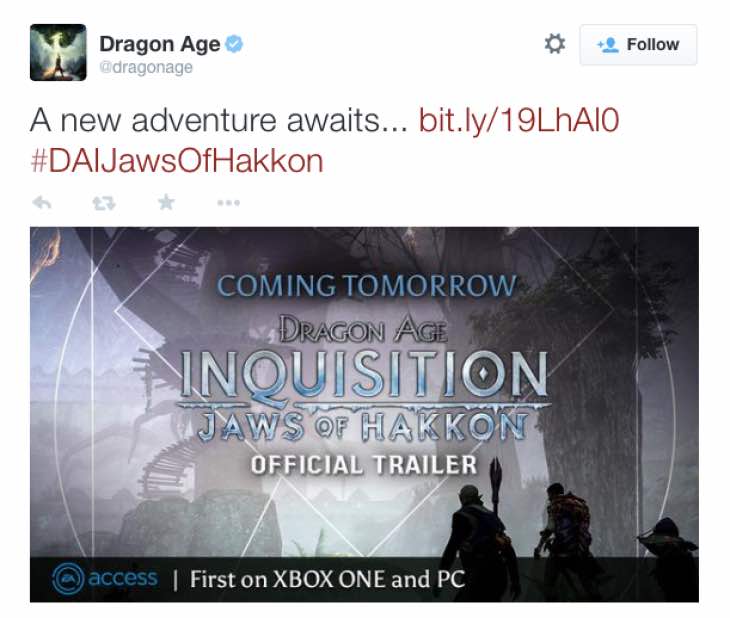 As far as we’re aware, there is no DAI Jaws of Hakkon PS4 release date yet and there’s no guarantee that it will come a month later – or if the deal terms imply a longer exclusivity bracket, akin to that of Destiny’s PS4 exclusive content which spans a year.

What Jaws of Hakkon actually contains though is a mystery. Bioware has said nothing about the content other than the Tweet above and to say that launches on March 24 for Xbox One and PC.

There’s no details about price either, so we are assuming that it will be free. As we wait for the Jaws of Hakkon trailer to drop on Tuesday, give us your reaction to the fact that this DLC has come out of nowhere.

PS4 users, did you know that DLC would be exclusive to Xbox One for a limited time?