We have some further good news for Xbox 360 users now, as just hours after Microsoft released the brand new Fall 2011 Dashboard Update for consoles, the company has now released an official Xbox Live mobile application for the iPhone and other iOS devices.

Considering that Microsoft has its own competing Windows Phone mobile operating system, you may find the news of an official Xbox Live app for iOS rather surprising, since as far as we can tell, this is the first time that Microsoft has released Xbox Live on a product other than their own brand.

Needless to say, Xbox 360 users won’t care at all since the Xbox Live app is a great addition to have on the iPhone and iPad and best of all, it is completely free to download as well. The interface is based on the recent Dashboard update that hit consoles this week, and the app will allow iOS users to access their friends list, send messages direct from your mobile and even edit your Xbox Live avatar as well if you want.

My Xbox Live will also allow you to compare your achievements with friends, but there’s no actual support for any game-based Xbox Live activity. Also missing is notifications, as you won’t get a notification when somebody sends you a message, or if they start playing a game. Hopefully Microsoft will be adding this feature into the app in a future update, but for now iOS users will just be pleased that there is an official app to begin with.

It is available to download from the App Store now, titled My Xbox Live. Try it out now yourself and let us know what you think of it. Since Microsoft has now released an official Xbox Live app for iOS, will the same thing happen for Google’s Android platform? We have a feeling that there’s less chance of this happening, but let’s hope that changes. 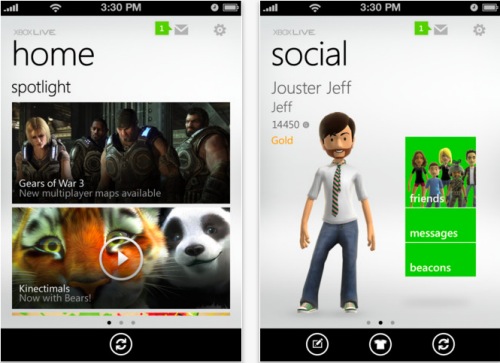