Visual Concepts are now under pressure to not only deliver a better performance with WWE 2K15 next-gen after mixed reviews, but also significantly increase the roster to accommodate the extra hardware resources that the PS4 and Xbox One offer. 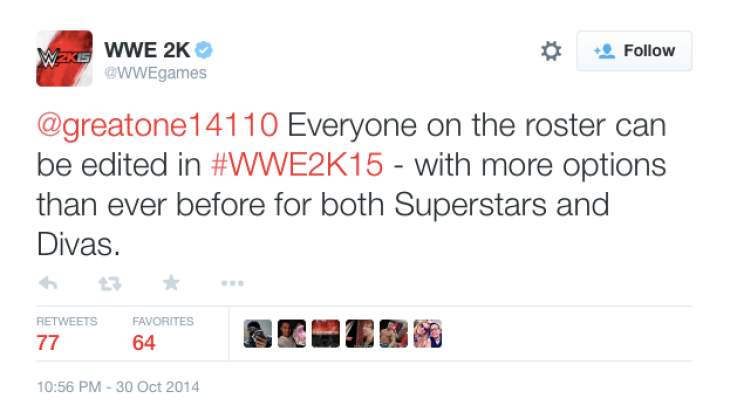 What excuses would the developers have if they can’t meet a roster which exceeds 100? We have already seen the fallout from the lower than expected roster count for PS3 and Xbox 360 platforms, so we fully expect Visual Concepts to make amends.

Judging by the Tweet which we have included above, it looks like a double-size roster on next-gen versions is fully possible. 2K has effectively just confirmed that every single wrestler who is on the roster today can be added into WWE 2K15 at a later date, so it’s looking good.

What we want to see though is even more old school superstars and a great list of wrestlers included from the Attitude Era. We’re talking Crash Holly, Eddie Guerrero, Perry Saturn, X-Pac, Billy Gunn and all those names.

Do you agree that we need to see a huge WWE 2K15 roster on PS4 and Xbox One as a minimum expectation? Let us know your thoughts on the current roster at the moment and who you want to see to improve it for next-gen.