We have great news now for those of you that own an Apple iOS device and enjoy playing beat ‘em up style games, as we’ve just received word that an iOS version of the classic 1987 title Double Dragon is in the works and should be available on the Apple App Store sometime in March.

According to a recent article by Brenna Hillier over at vg247.com (via Evil Avatar), the upcoming revamp – which is coming courtesy of Aksys — will feature brand new art and sprites, remixed music, new enemies and bosses, achievements, unlockable characters and a gameplay overhaul.

What’s even more exciting is the fact that the game will feature a two-player co-op mode, which can be played via Bluetooth. As Jim Sterling over at destructoid.com notes, the game also promises a simple combo system and easy to use touchscreen controls. 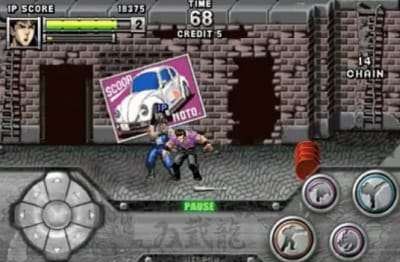 You can read more about the game and keep up to date with the latest news via the Double Dragon Facebook page. You can also view several screenshots from the upcoming game via the destructoid.com website and view a trailer through the YouTube link here.

Is this the type of game that appeals to you? If so, will you be downloading the app?