We can tell you that Dixie Kong, from the legendary Donkey Kong Country 3 on the SNES will be returning for the game, but it’s possibly not the biggest highlight for us. This is reserved for the amazing confirmation that original series composer David Wise is going to be making the soundtrack for Donkey Kong Country Tropical Freeze.

This marks a great return for a man that many retro gamers believe is largely responsible for a good portion of the success of the original Donkey Kong Country games on the SNES. With classic tracks such as Stickerbrush Symphony under his belt, he’ll now be making brand new material for the upcoming Wii U game and we can bring you a taster of what is coming right now. 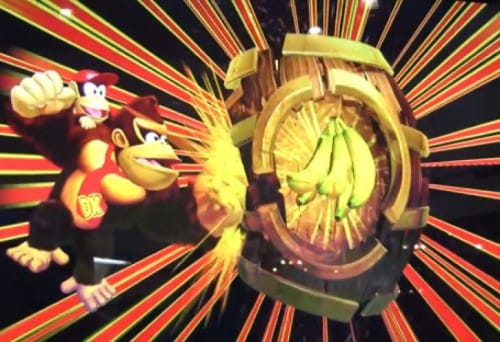 In the above video that we have provided for you, you’ll see around 14 minutes of non stop gameplay, showing the four levels of Donkey Kong Country Tropical Freeze that was in playable format during E3 2013 on Nintendo’s showfloor. Perhaps more importantly, it gives you a nice preview of some of the tunes that David Wise has already finished for the game.

To give you an example of the talent we’re dealing with, skip to 7 minutes on the video and you’ll see the music change to a classic David Wise ambient theme whilst Donkey is in the water, only to switch to a more upbeat theme when he surfaces. This alone tells us that we are once again in very good hands with David Wise as the composer, and we could all be listening to Tropical Freeze tunes in years to come.

Are you a big fan of the music from the original Donkey Kong Country games? If so, let us know if you agree that his inclusion is the biggest thing to happen to the game so far.