A couple of weeks ago we brought you IGN’s pre-release review of the Nintendo Wii title Donkey Kong Country Returns, which gave the game an impressive 9.0 out of 10. Now that the game has been released, I thought I would bring you a round-up of a few more reviews, to give you a better idea.

The first review comes from Andy Robinson over at computerandvideogames.com. This reviewer describes the DKCR game as an unapologetically relentless, ruthlessly challenging game that has been designed with hardcore gamers in mind.

In fact, this reviewer even goes on to say that it’s a more impressive platform game than New Super Mario Bros. The next review is from Brett Elston over at gamesradar.com. This reviewer appears as equally impressed as the last, and has given Donkey Kong Country Returns 8 out of 10. 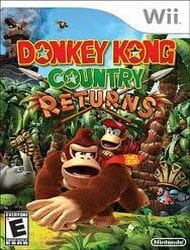 Donkey Kong Country Returns definitely makes players work hard at each level, and will no doubt tax even the most skilled gamers. The game will most certainly keep players interested, with every level having multiple ways to interact with the background and foreground.

The downside to this game however is the fact of it being so hard, and we’re not talking in a fun, challenging way either. The final review comes from Mike Anderiesz at guardian.co.uk, who also claims that the game is rather difficult to play.

The overall conclusion is that although the game isn’t perfect and may not catch the imagination of fans in the same way as the original did, it is colorful, creative and will most likely still have you playing way after Christmas. You can read the full reviews via the links above.

What do you think about the Donkey Kong Country Returns game?