We have some good news for those of you planning to pick up Donkey Kong Country Returns when it releases on the Nintendo Wii, as the reviews for the game are now out, and they are very positive indeed.

We have taken a look at various reviews for the game, but IGN’s review has caught our interest in particular, as they have scored it an ‘outstanding’ 9/10, but they make a very bold claim which will certainly get you interested, especially if you played all three DKC games on the SNES.

Here is what IGN’s Craig Harris had to say about the game:

”This is an incredibly challenging, old-school throwback that might not set the genre afire with innovation, but in my book, it’s better than the awesome game that inspired it. ”

The rest of their two-page review is full of compliments for the game, but can it really be better than the original Donkey Kong Country on the SNES? Personally speaking, that game is one of the greatest games of all time, not to mention it contains probably one of the best soundtracks in a video game period.

It is great to hear that Retro Studios’ DKCR title has not disappointed in picking up the pieces from famed developers Rare, but hearing that it could be even better than the original has certainly got us chomping at the bit to play this.

Check out IGN’s review here and let us know your thoughts on it. Are you planning to pick this game up? 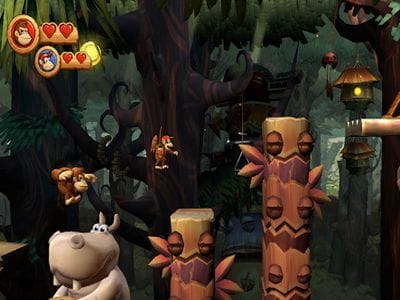