People join Tinder in order to find the right partner for them, but from time to time there are cases in which a person is not the right match for you. We are sure there have been moments when you see a photo of someone on Tinder and their looks are not as you had hoped, but we bet they are nothing like this funny story.

Journalist, Joe Veix, based in San Fransisco decided that he wanted to do things a little different, and so joined Tinder as a dog. He did this because he was curious how people would react. We have seen animal Facebook accounts but this is very different, although much funnier.

There have been many questions asked as to how to Tinder, and we know that being human never came up in conversation because it was obvious, so it is interesting to see how people react with the dog’s account.

The Tinder app matches users who are nearby by looking at various sections of a profile, so we wonder how Joe Veix’s profile is matched with someone?

Chats were harmless at first, although things were a little quiet when he was first uploaded to Tinder as a male dog, but the moment Veix deiced to change the dogs gender to female, the account became far more active. 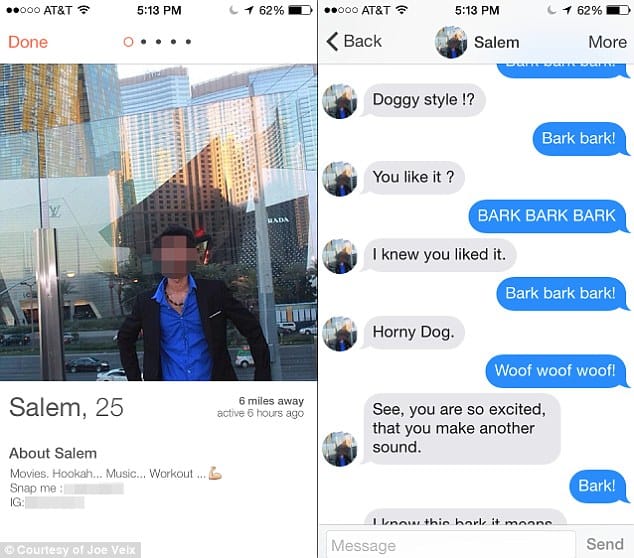 You can read a list of chats between the dog and other Tinder matches, but we do worry at a few of the chats because they are of a sexual nature, although when you take these into context they were rather funny. However, some of the chats were silly and took on a more aggressive nature, and so you would be better reading them on The Daily Mail rather than us say them.

One thing we have learned from this experiment though, people have too much time on their hands, especially those using Tinder.