If you own an Xbox 360, you may want to be reminded that Forza 4 is already available to buy in the US and will be out in Europe this coming Friday, October 14th. The game is shaping up to be the best Forza game in the series so far, and we have a new gameplay video to show you which gives an example of this.

Turn 10’s fourth entry in the successful Xbox franchise has seemingly come out of nowhere, as it hasn’t really received much attention, as say Forza 3 did in the build up to its release back in 2009.

The new game has so far received rave reviews, with gaming sites such as IGN awarding the game a 9.5/10 and Eurogamer offering their thoughts with an impressive 9/10. As we have come to expect in Forza titles, the stunning graphics play a key part in the overall presentation of the game and if you want some realism added in there too, there’s even official support from BBC’s award winning racing show Top Gear, featuring in-game commentary from Jeremy Clarkson during the Autovista mode of the game.

As for the video we have to show you, it comes courtesy of CVG and offers gamers the chance to see what the very first race will be in the game as soon as you start the single-player mode. Players will be asked to complete a few laps overlooking the Bernese Alps in a Ferrari 458 Italia car and if you needed any reassurances on the graphics quality of the game – this video surely offers that. 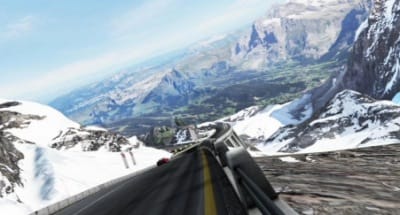 Check out the clip below for yourself and let us know what you think of it. If you’re in the US, you may have even picked up the game already – if so, let us know your general impressions of the game so far. Best racing game on console or not?