If you own a copy of the DJ Hero 2 game on the Xbox 360, PlayStation 3 or Nintendo Wii, then we have some pretty exciting news for you. Activision has just announced three brand new mixes for the game, which features mash-ups of artists such as Lenny Kravitz, The Prodigy and Linkin Park.

The first of the packs is the Hard Edge Mix Pack, which features Pixies’ Debaser mixed with Invaders Must Die by The Prodigy, and Beastie Boys’ Body Movin mixed with Rock and Roll is Dead by Lenny Kravitz. According to Stephany Nunneley over at vg247.com, these tracks are available to download now.

Next to arrive — on December 14th — is the Old Skool Mix Pack, which includes Fat Boys’ Human Beat Box mixed with King of the Beats by Matronix, Tag Team’s Whoomp (There It Is) mixed up with 45 King’s The 900 Number and Beastie Boys’ Triple Trouble, mixed with Tone-Loc’s Funky Cold Medina. 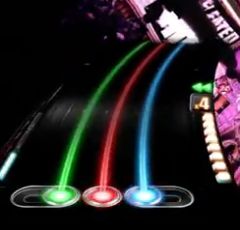 DJ Hero 2 fans will then be able to download the Linkin Park Mix Pack on December 21st, which features remixes of The Catalyst (Does It Offend You, Yeah? Remix), When They Come For Me and Pts.of.Athrty. All tracks will be available to download as singles on the Wii, for 300 Wii Points.

The Hard Edge Mix Pack is available to download for 480 Microsoft points / $5.99 and the Linkin Park and Old Skool Mix Packs will be available for 640 Microsoft Points / $7.99. Will you be purchasing any of the new mix packs?