If you are wondering how Dishonored stacks up when it comes to PS3 vs. Xbox 360, then you might want to see a visual review from one of the most popular websites that provide screenshot comparisons. Lens of Truth are known for their screenshots that feature rollovers and sliders to see exactly how two platforms compare for the same game, and today they published their Dishonored review that puts the PS3 head on with the Xbox 360.

Some of you might own both systems and are not sure what platform to purchase Dishonored on, or you might be curious to see how the other system performs when compared to your platform. Dishonored is certainly one of the most anticipated games to launch within the last month, and some say this year but that is debatable considering other titles we’ve been hands-on with.

You can see one of the Dishonored PS3 vs. Xbox 360 comparison screenshots on this page, but you’ll want to see this article for the full interactive experience on offer by Lens of Truth. Take a look and let us know if you can see any difference at all between the platforms.

We spent some time with Dishonored at a recent gaming event in London, and enjoyed the impressive stealth action, but for us the game really stood out thanks to the game design and artist direction. Some gamers won’t like this design and mistake it for “bad graphics“, some PS3 players have stated they won’t buy the game thanks to the problems with Skyrim Dawnguard DLC and the fact that it’s published by Bethesda, but the early reviews certainly point to success and we expect sales to show this as well in the coming weeks. 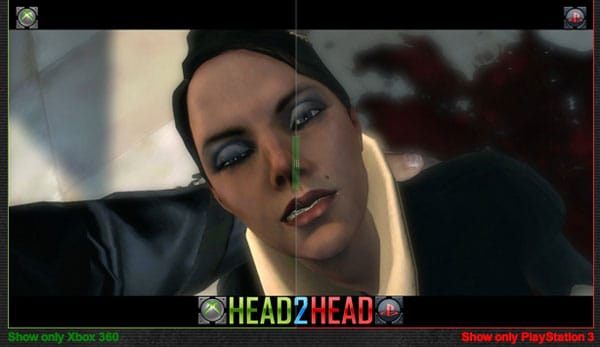 When it comes to Dishonored did the Xbox 360 win this screenshot comparison, or could it be the PS3 that stood out for you? Personally we don’t really see a big difference on this one, but we know a lot of you have an opinion so please share it below in the comments.