Despite a number of desirable new products becoming available over recent months the Apple iPad remains the market leader. It seems we are close to the launch of the third generation of device with a number of new features rumored to be coming. Many iPad owners love their device and it would take Apple to release a disastrous iPad 3 to kill that love.

For the current models available it has been found by a recent ChangeWave survey that 74 percent of owners are very satisfied with their iPad. This compares to only 54 percent that feel the same about their Amazon Kindle Fire, and 49 percent of owners of other tablet devices. This means that almost three quarters of owners are glad they decided to make the iPad their tablet of choice. 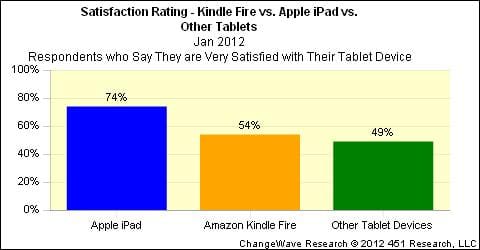 There have been a number of features rumored to be coming in the next model, and one of these standout features is the display. It has been rumored the pixel density will see a major upgrade over the current model. When the iPad 2 was released one of the major new features was the processor that improved the speed of the device a lot. But that was last year and is a long time in the tech world and Android tablets are now benefiting from quad-core processors.

Recently though it was reported that the new A6 chip will also come packing four cores to take the next iPad up to another level. This is thought to coincide with 4G LTE connectivity becoming available and will be made possible with an improved battery that could be bigger in size, but also different in shape.

The Siri assistance feature was introduced with the launch of the iPhone 4S, but there has been some speculation that the iPad 3 could become the next Apple device to get some sort of Siri access. Code found in the iOS 5.1 beta mentioned the iPad in Siri Dictation, which has led some to feel it will become available.

Design wise the iPad 3 is largely expected to remain basically the same except maybe slightly thicker to accommodate for the improved screen and larger battery. There has been some websites comparing the iPad 3 with the rumored Samsung Galaxy Tab 11.6, but the trouble is any comparison can only be based on rumors, and is a bit early for any real insight.

Many reports recently hint the iPad 3 will be released in March with a possible reveal coming at the start of the month with availability coming shortly after. The facts are out there now though how much current owners of the iPad love their tablet PC and Apple will working to continue you that into the next model.

So the iPad is loved by owners of the device at a higher percentage than many rivals, so what would the iPad 3 have to do that would make this percentage drop? It would have to be pretty bad and we find it hard to see this as a possibility. Below you can see a video that is discussing some of the latest iPad 3 rumors.