All of what we know so far regarding the Droid Bionic has been hearsay and speculation. We thought we had a good idea of what features we can expect, but as always a curveball has been thrown. For a short time the official specs were shown on the MotoDev site. Do not try and see, as they have now removed it. There are a couple of issues that are a little disappointing, the camera and the CPU.

We still do not have a confirmed release date, but at least we are one step closer with these specs. Normally when information gets leaked like this then the device itself should start making its way to market. The specs include a 1GHz OMAP4430 dual-core processor, 1GB of RAM, 8-megapixel rear-facing camera and a VGA front-facing camera. The qHD screen size is 4.3-inches, Gingerbread, HDMI 1.4 and LTE.

While we already knew most of these features there were two that stood out for us. The first is that rear-facing camera, as we had assumed that it would be 2-megapixel. The other change is to the processor, as it is not the Nvidia Tegra 2, which had previously been announced. This is a warning to all you Apple fans out there; do not expect most of the features that has been rumored for the iPhone 5 — well maybe some. 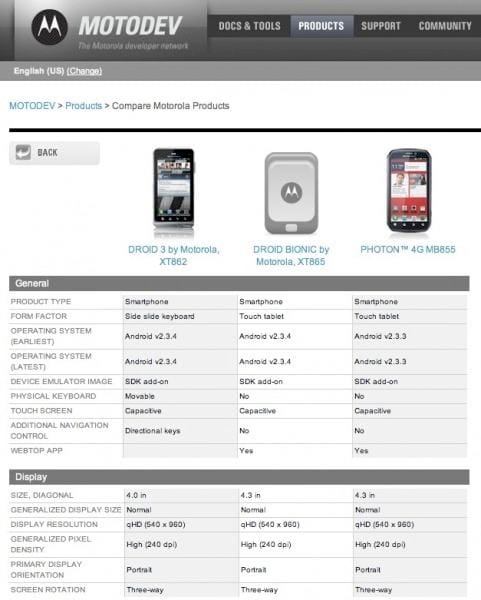 Droid-Life reported that the Droid Bionic had appeared on the MotoDev site sandwiched between the Droid 3 and the Photon 4G. Now we can understand why they would put the Bionic next to the latter, but uncertain why the former was there? However, it was good to look at the official specs for all three, just to see how they compare. The Photon 4G seems to have one or two more features than the Bionic, and a dual-LED flash compared to a single is just one of them.

Both these phones will be in competition with each other, as one is on Sprint and the other is coming to Verizon. Knowing which is the best will come down to a number of factors, but HERE we explain why the Droid Bionic is the fourth best smartphone on Verizon. While you sit around waiting for Motorola and Verizon to get their act together, we have found 5 INFOGRAPHICS that should be of interest. OK, so we know that one or two offers up old information, but it is still worth having a read.