The Consumer Electronics Show’s unpredictability is the side many people will find most interesting about the event this year and that theme continues today with the announcement of LG’s Smart Fridge. Although it looks like a normal high-end fridge at first glance, it has many features including an LCD touchscreen that make it far from normal.

According to an article at the Guardian smart fridges taking off has been ‘one of the greatest technology myths of the last decade.’ The idea of a fridge being able to talk to a user and recommend foods and recipes seems pointless but the fact that it is now a reality mean another technological breakthrough has been made, and we think that’s cool.

The LG Smart Fridge is also equipped with a camera and internet connections as well as its touchscreen, giving it the ability to order groceries for its owner online and download recipes. It does this by using the scanner built into its door on receipts or barcodes and recognizes when contents are low so it can automatically add the items to the owner’s online shopping account. It can recommend recipes from the existing contents in the fridge and even supports the capability of communicating with the oven so it can automatically set that for the owner to, this part sounds like a disaster waiting to happen.

The person behind the article at the Guardian was less than convinced by this amazing fridge claiming nobody wants to communicate with their fridge. However artificial intelligence is the future and any device that can aid your daily routine is a useful one to us. If you agree and are interested in owning the LG Smart Fridge it is reported to be going on sale in the UK sometime this year for the price of about £2000. Are you impressed by this technology breakthrough or do you feel it is just a gimmick? 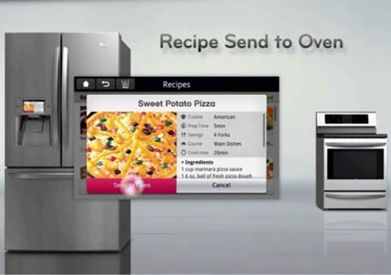