The UFC 117 results are now in but how did the diehard UFC fans watch last night’s event in Oakland, California? One way was to use the official Ultimate Fighting Championship app, which costs only $1 for iPod touch and iPhone.

MobiTV then charge $6 for archived fights and $45 for a live UFC stream, which is the same price you pay via a cable company. Should a small mobile screen pay the same price as a big screen?

MacWorld has taken a look at the UFC app, in their review they said diehard fans “may be interested” in the applications features that include live tweet updates from the fighters, win-loss records, video highlights, schedules for all upcoming pay-per-view UFC events, and live streaming. 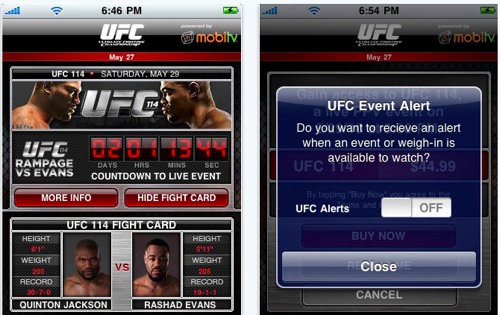 The reviewer said casual fans and newcomers “won’t find much to hold their interest”, with the biggest letdown being “lack of content”. The real advantage comes with live streaming of events such as last nights UFC 117 but that comes at an extra cost. MacWorld point to the iPad’s bigger screen as a possible advantage, but sadly the iPad is not supported at this time with only the 2x mode.

Diehard UFC Fans – live streaming via an iOS device, is it worth it?