Our readers have mixed opinions when it comes to which console is better out of the Xbox 360 and PlayStation 3, so much so that we don’t bother asking the question any more, however when we see a title hit multiple platfroms we like to see the differences which difference consoles bring – today we will take a brief look at Deus Ex: Human Revolution.

Deus Ex: Human Revolution arrived in North America today and so far we have heard lots of good things about it, however if you own an Xbox 360 and PS3 you will probably be wondering which version to go for – well if load-times frustrate you we can confirm that the 360 version is superior. 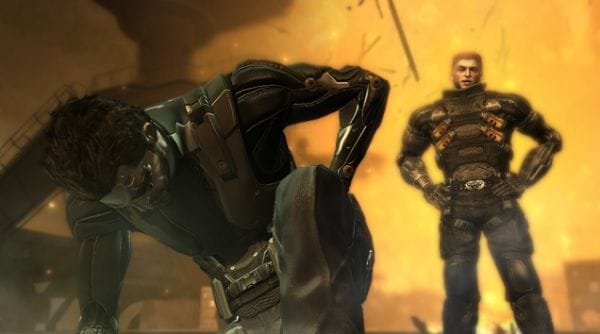 The video we have embedded at the end of this post directly compares load-times for the game when running on Xbox 360 (installed), PS3 (installed) and Xbox (from the disc), in every load screen we see the Xbox 360 with Human Revolution installed locally outperform the PS3. The game’s intro sequence takes roughly 22 second to load on the 360 and 26 seconds for the PS3, whilst running the game from the disc on the Xbox 360 added 11 seconds to the load time (33 seconds).

If your not great at the game you will spend a lot of time dying, well if you die when playing Deus Ex locally installed you will take 21 seconds to respawn, whilst respawning when running the game from the PS3’s HDD will take roughly 26 second – again running the game from the Xbox 360’s optical drive adds roughly 11 seconds to the load times. We think that a delay of a minimum of 20 seconds after each death is pretty excessive – do you?

Later on in the video we see another demonstration which shows the same pattern as the other load times, we don’t think it really matters that PS3 gamers will have to wait roughly 4 seconds longer at every load screen than Xbox 360 gamers who have installed the game locally – however we do find it interesting, we would love to see how a locally-installed version of Deus Ex: Human Revolution running of a solid-state drive performs.

Are you surprised by the difference in load times?