Destiny Xur’s Exotic items for week 9 include the Truth Rocket Launcher and so, we wanted to offer a weapon review within a number of videos to reveal a little more about this item. If you haven’t purchased it before, or want to learn more about the Exotic weapon then you can do so within the gameplay video below.

The Truth Exotic Rocket Launcher on sale this weekend from the Agent of the Nine requires level 20, has a 260/300 attack, and costs 17 Strange Coin. We have included a screenshot below that was taken directly from Destiny today, so you can purchase the Truth Exotic Rocket Launcher right now from Xur in his location today and on November 8th / 9th. 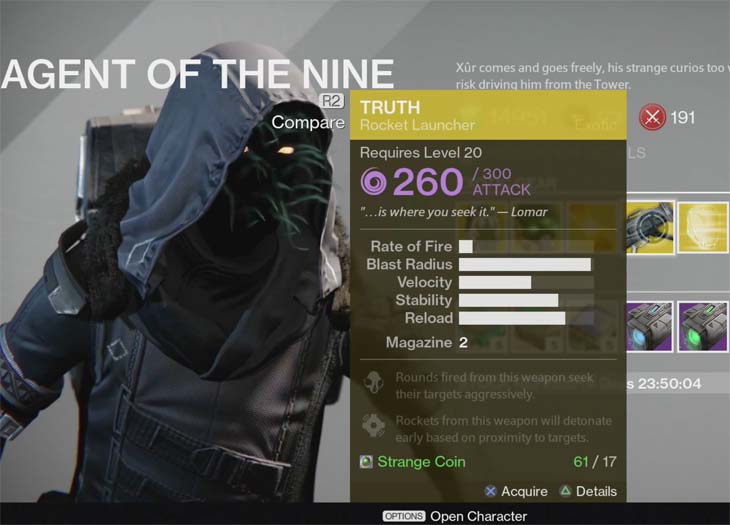 We have two videos giving Destiny’s Truth Exotic Rocket Launcher a review. While you will see both videos below, they are reviewing the rocket launcher from different perspectives thanks to one detailing the upgrade path and the other attaining it from Xur a couple of weeks ago.

The first video also includes some gameplay for the Truth Exotic Rocket Launcher. You get to see this weapon used in battle within their review, so this offers insight into how much damage it does during gameplay.

If you want to see even more gameplay, then take a look at the second video that also features a review after one player received the weapon through the Crucible reward system. Did you purchase the Truth Exotic Rocket Launcher from Xur in Destiny today?