We are almost ready for another appearance for Xur and this weekend is going to be extra special, as it’s going to be Xur’s Halloween location for October 30. We now have a heads-up on Xur’s arrival time for Halloween as remember he will be there early in the UK this week.

As always, we will be the first to let you know where Xur’s location is on October 30 for Halloween and what he will be selling this week.

Last week, Xur didn’t offer a weapon but he did have the Year Two exotic Empyrean Bellicose, along with the Mask of the Third Man and the Skull of Dire Ahamkara.

With this in mind, what are you hoping to see Xur sell for Oct 30 and do you think Bungie will have an extra treat in store due to it being Halloween?

It’s well worth reminding you that last year Xur did have a surprise for Halloween. This came in the form of the Flight of Shadows consumable which could be bought from Xur but only if you were wearing the Jackolyte consumable pumpkin mask. 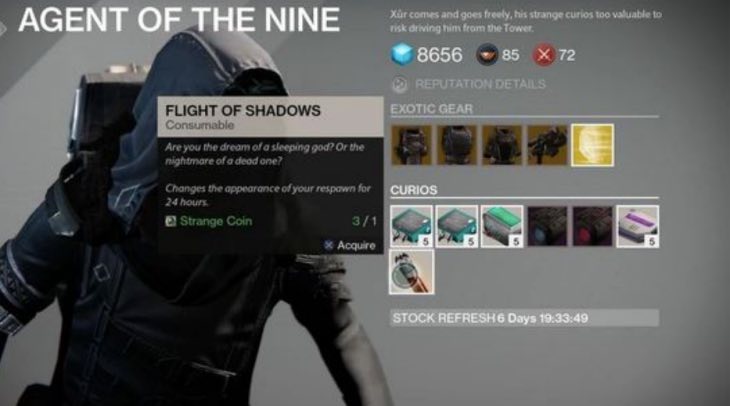 If you were wearing this, Xur then offered the Flight of Shadows for 1 strange coin which could change your respawn animation for 24 hours.

This respawn animation was rather awesome as you can see from the video clip we have added below – placing bats around you as you re-enter the map in front of other Guardians.

We don’t want to start a theory that doesn’t turn out to be true, but many players are already planning on wearing their Jackolyte before going to see Xur on Friday morning.

Some are predicting that Xur will sell something else, while others even believe that the somewhat useless consumable Raisins from the Festival of the Lost Halloween event may have something to do with tomorrow’s Xur inventory.

Either way, we have a feeling that Xur will definitely do something for Halloween regardless. The question is, do you have your Jackolyte ready just in case something special happens?

Xur will arrive in the Tower at 2am Pacific Time and 5am Eastern Time, but now at 9am in the UK not 10am – remember this. The change is due to Daylight Savings Time ending in the UK and now back to GMT time zone.

Let us know your predictions below on what items Xur is selling for Halloween 2015!

Update: Xur is live and his confirmed location for October 30 is the Tower by the Crucible. Items sold over Halloween include The Taikonaut, Graviton Forfeit, Alchemist’s Raiment and the Zhalo Supercell auto rifle!