If there is one piece of House of Wolves gear that players are hoping to see from the Xur location on June 19, it is definitely the Celestial Nighthawk exotic hunter helmet.

This lovely helmet is considered one of the best new items from the game right now, ever since the launch of House of Wolves a month ago.

As far as we’re aware, Xur has not sold the Celestial Nighthawk yet and players have let temptation get the better of them by already cashing in their motes to get it via other means such as Nightfall.

Xur recently sold the Nothing Manacles gauntlets, which are brand new from House of Wolves so we do know at least that Xur can carry HoW items in his inventory.

As a result, we can see that gamers have been praying for the Celestial Nighthawk to show up this Friday – so let’s all say a prayer to the RNGesus. 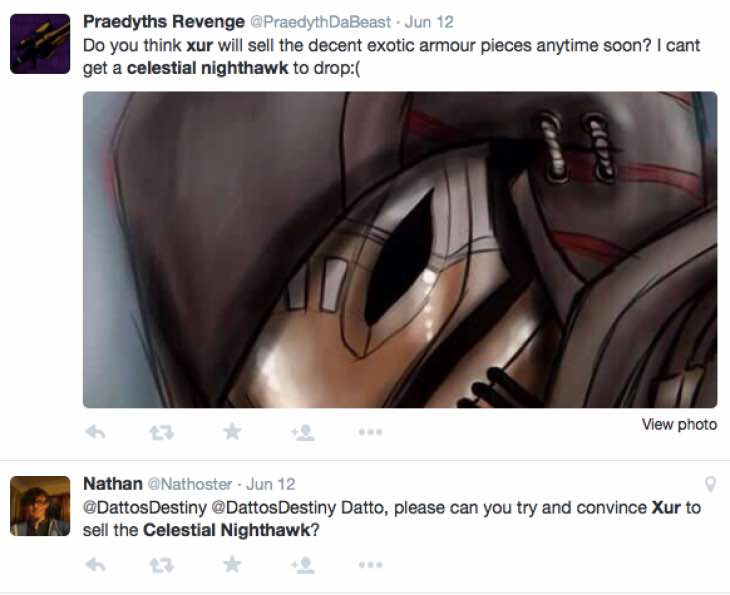 That means you can take out bosses with ease, including Crota’s shield during Crota’s End raid on hard. Looking ahead, we can also see this Celestial Nighthawk being extremely useful against Oryx once The Taken King is live this fall.

Are you a player who is hoping that Xur sells the Celestial Nighthawk? If so, let us know your thoughts on how good it really is below.

Remember, Xur appears at 10am UK time, 2am Pacific Time and 5am Eastern time. Head back here to find out Xur’s location on June 19 first as well as what items Xur is selling.

Update: Xur is live at the normal time and there’s a twist. He’s back at the Reef this week, not the Tower. He also has the Hard Light and a new item from House of Wolves – find out what it is here.