With all the talk on the House of Wolves leak this week, let’s get back to reality as it’s almost time for the next Destiny Xur location on January 16.

Last week was a decent showing, with the Agent of the Nine offering The Last Word exotic Hand Cannon. He also offered the Starfire Protocol for the second week in a row, as well as the Lucky Raspberry chest armor for hunters.

At the moment, it seems like players are desperate for Xur to sell the Gjallarhorn or Ice Breaker. Every week we get the same feedback and complaints as soon as Xur’s inventory is live, with players not happy with anything other than those two weapons. 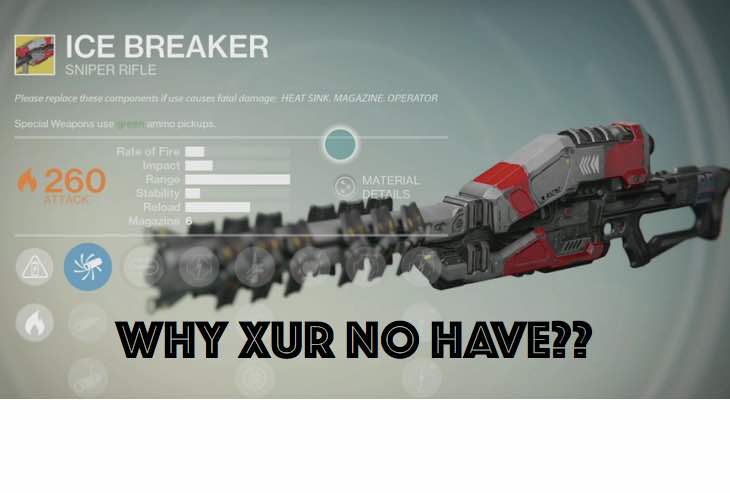 Given that they are so powerful and can basically take you from bottom to top of the leaderboards, we’re not surprised with the demand.

We do wonder though, it has been months without any sign of the Ice Breaker or Gjallarhorn. Has Bungie decided that they are too powerful and have effectively blocked both weapons from appearing in Xur’s item list?

The general consensus at the moment is that Xur’s items are completely random which is why we had Plan C two times in a row. How would you feel though if Bungie has secretly altered the mechanics though so that Icebreaker, nor Gjallarhorn show up?

Hopefully this won’t be the case and we will see one of them when Xur’s location in the tower is live on Friday. Let us know your thoughts on how Xur’s inventory is offered each week and if you are waiting for both of these weapons too.

Do you think this is the week when we will see either of them? Remember, Xur’s spawn time is 9am UK, 1am Pacific and 4am Eastern Time on Friday January 16.

UPDATE: Wow, would you believe it? Xur is selling the Ice Breaker! Full details on the location and the other items here.