We are again waiting for another appearance from Xur, with fans still requesting that the Destiny Xur location for July 3 brings the Gjallarhorn rocket launcher to celebrate Independence Day.

If you have been playing the game since launch though, you’ll know that Xur has not sold the Gjallarhorn since the second week of launch – leading most to believe that Bungie has purposefully removed the weapon for being too powerful.

Time and time again though, there’s a certain group who just believe that it is bad luck and that the Gjallarhorn is still coming. 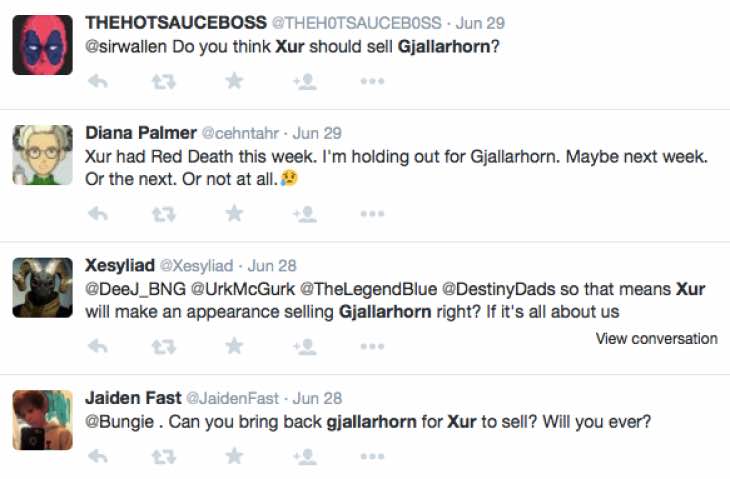 We thought it was hilarious that even Sony’s Adam Boyes mentioned the Gjallarhorn by name during the Sony E3 press conference about his personal efforts to get one – but to no avail.

It really is the weapon to aim for still, so will Bungie make an exception for July 4 celebrations? We are not getting our hopes up, but you never know what will happen – Xur still has Icebreaker for sale don’t forget.

Xur will show up one day before Independence Day on July 3 at 10am UK time, 2am Pacific Time and 5am Eastern Time. As always, let us know what you want to see from Xur’s July 3 inventory and if you believe that Gjallarhorn will one day be sold.

Do you think Bungie are planning this surprise for the weekend or will it make the game unstable in terms of balance?

Update: Xur is live again in the Tower this week, not the Reef. You’ll find him by the Tower Hangar. Find out what he is selling in our latest report here.