There’s been an official response to reports that the Destiny servers are unavailable on Saturday, December 6th. Continuing on from our reports about the Xbox Live servers going down today, we not only see Bungie commenting on the situation, but notice the status has changed once again with Xbox or Destiny servers reported down with what might be a DDoS attack once again.

Earlier today, we highlighted one of the biggest outages for Xbox One and Xbox 360 owners in a few weeks. The problems were credited to Lizard Squad, although since that news it seems more issues have emerged in particular for Destiny players trying to take advantage of the new Xur location this weekend. 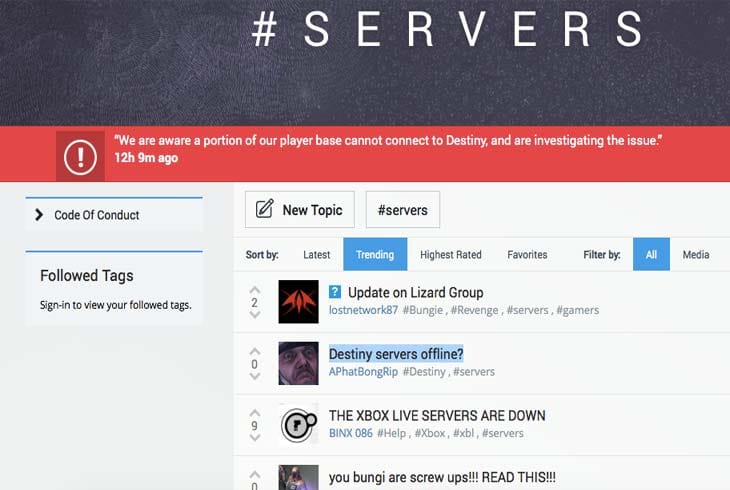 Reports about Destiny servers being down and not available are being left on both Down Today, and also the official Bungie forums. It’s clear PS4, PS3, and Xbox owners are unhappy with the outages and want something done about those causing the server problems today.

Official and player reports – Bungie released a statement stating they know there’s a “portion of” their player base not able to connect to Destiny. The latest update just said they were, “investigating the issue”.

Within the last few moments, we have seen players leave hundreds of tweets and forum updates detailing further issues that are unclear if related to another DDoS. One gamer said, “Destiny servers offline” and another added, “Xbox Live servers are down”. Again, it’s not clear what service has the issues and if this is due to another DDoS attack.

Certain player opinions only add to the confusion when blame is put directly on the developers themselves. As seen in this comment, “Destiny get it together, you truly are the worst when it comes to servers”. This could be unfounded if the problem lies with Xbox Live and especially if they are under a DDoS attack.

Are you having further issues connecting to Xbox Live or Destiny today?