The die-hard gamers don’t take voting in the Golden Joystick Awards likely, in fact most want their vote to go to a game that truly deserves recognition. This could be due to the way a video game story impacted their lives like with Life is Strange, or due to the pure excitement and gaming time spent with the likes of GTA Online and Call of Duty Advanced Warfare.

In terms of Best Multiplayer Game for the 2015 Golden Joystick Awards it could be down to just Destiny, GTA Online, FIFA 15, or COD AW for many of Product Reviews readers. The options cover a few other titles as well, some of which will gain the vote of thousands. 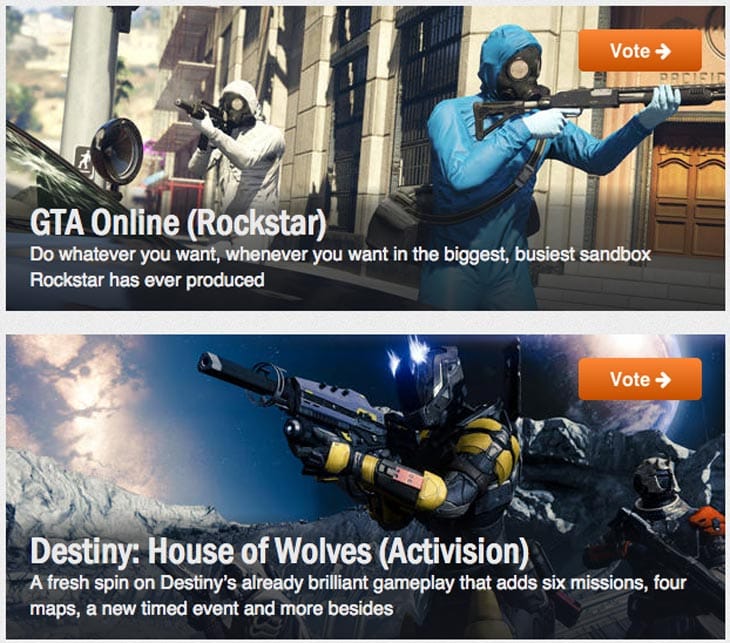 Best Multiplayer Game in 33rd Joystick Awards – You will have to choose between Monster Hunter 4 Ultimate, Heroes of the Storm, Mortal Kombat X, Bloodborne, Kalimba, Splatoon, Destiny: House of Wolves, GTA Online, FIFA 2015, PES 2015, and finally Call Of Duty: Advanced Warfare. These are very different games attracting a variety of gamers, but which should get your vote this year?

There’s no doubt that Xur in Destiny has kept some players hooked to each Friday when he arrives with new exotics. In fact, this is an idea that GTA Online could benefit from, but then FUT in FIFA 15 has a massive following as well. You can leave your vote at the official voting destination at gamesradar.com/goldenjoystickawards/vote/, although we’d love to hear from Product Reviews readers about what title deserves the best multiplayer game award?

You can count on the FIFA 15 Vs PES 2015 option being debated in football circles as well. Again, leave your vote and feel free to debate the choices below.