It has become apparent that the Red Bull Epic quest for Destiny which we told you at the start of June won’t be available for European players.

Initially details for The Taken King DLC expansion were leaked prior to E3, with this Red Bull campaign one of the main culprits. Now we know exactly what the promo is going to entail and it is bad news for those that live in Europe.

For North America though, it’s dream land. Simply buy a special Destiny branded can of Red Bull from now until September and you can redeem a code for some goodies.

The main highlight is a Destiny Red Bull Epic Quest which is advertized as a “a never-before-seen, multi-stage mission in The Taken King that will test the speed and strategic abilities of Destiny players in new ways.” 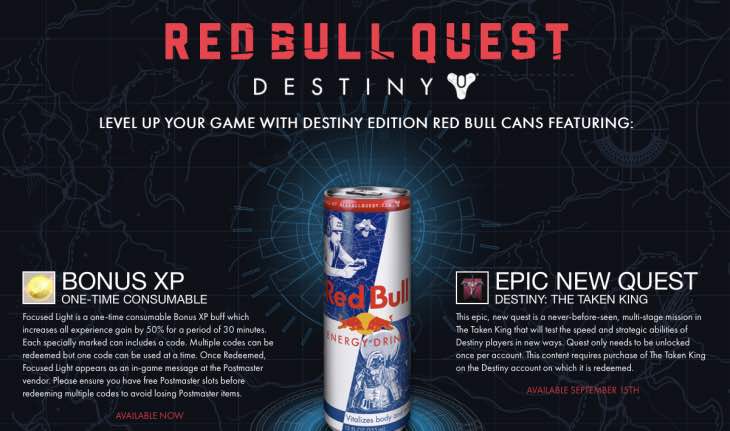 This won’t be available until September of course when The Taken King launches, but the codes do something else as well. You can use them to redeem Destiny Bonus XP power-ups called Focused Light which grants a 50% experience gain boost for 30 minutes.

The Red Bull website says that multiple codes can be redeemed but only one power-up can be used at a time. So not only are American players getting an exclusive quest for The Taken King, but they are also getting a better method to rank up over the Summer.

Europe Destiny players meanwhile get nothing – does this seem fair to you? We’ll be writing more about this Red Bull promotion in the days ahead as it fully rolls out, but for now give us your reaction to it if you live in Europe.

Social media may be your best hope of getting hold of a code since we haven’t spotted these Destiny Red Bull cans outside of US and Canada.