Following on from the leak involving the Destiny DLC 3 expansion The Taken King, we wanted to hear your thoughts on the rumored price point, since the next DLC could be double the price of House of Wolves.

If you haven’t heard, there’s strong rumors suggesting that The Taken King is out on September 15, but more importantly that it will cost $40 to buy.

Remember that The Taken King won’t be covered by the Destiny expansion pass either, as this only applied to The Dark Below and House of Wolves.

So this marks the first content that everyone will have to pay up front for and we can see that there’s already some skepticism from fans who are not happy about hearing about potentially paying double. 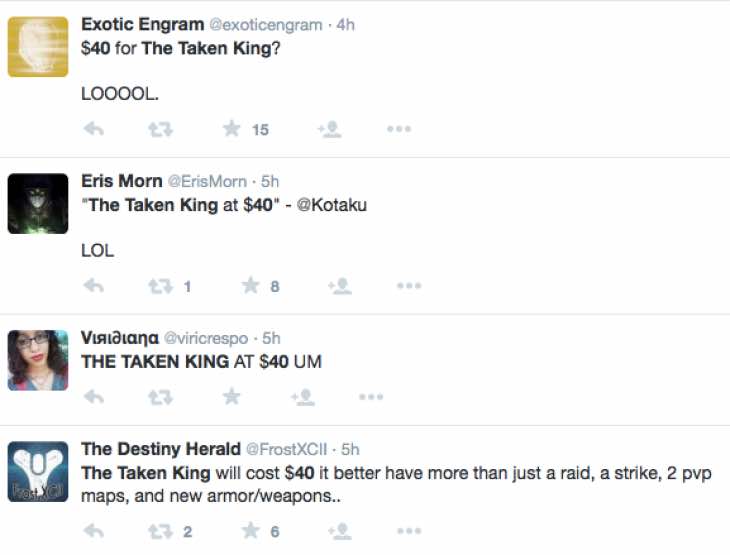 Both the Dark Below and House of Wolves were $20 each as a separate purchase, so what would warrant paying $40 for the third pack, given that the full game cost $60 at launch?

We obviously know that there will be a new raid involved, a ton of new weapons, new maps and a vast array of new armor to buy.

However, we’re also hearing that The Taken King includes three new sub-classes too as well with super elemental abilities such as a Void for Hunter, Solar for Titan, and Arc for Warlock.

That last part plus the combination of a new raid is probably why Bungie are rumored to be charging $40 for it. With that said and done though – would you still have a problem paying that price?

We all know how amazing Destiny is and still is right now with House of Wolves. Let us know your thoughts on the Taken King leaks and if you would still be willing to pay $40 no problem.