Xur has just spawned in the tower today and he brought a big surprise with him. Often the cause of weekend disappointment, there’s no sign of that on March 13 as Xur is selling the Red Death today.

For those that haven’t been lucky enough to get it as loot, the Red Death is an awesome weapon. As a result, we now wanted to bring you a quick heads-up on a Red Death Pulse Rifle review post patch after Xur – for anyone who is planning to drop 23 strange coins on it.

Truth be told, 23 coins is quite expensive for a single weapon – especially considering that the Ice breaker only costs 17 coins in comparison. 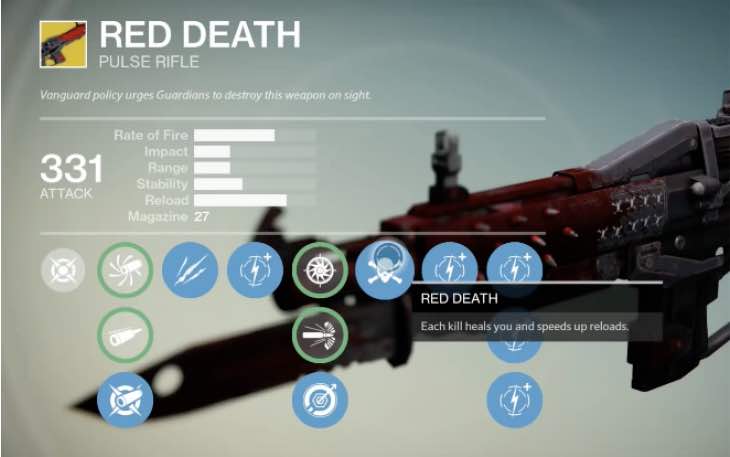 Then again, most of you will have stockpiles of strange coins after weeks of nothing to buy so the price shouldn’t be an issue for any Destiny player right now.

Plus, the special ability of the Red Death allows you to gain health with each kill and with an extra bonus – you’ll get faster reloads as well.

That is pretty amazing in competitive situations and the Red Death should definitely be considered as your primary weapon when taking on Crota’s End hard mode for those that are still tackling that raid.

It also comes with the Unflinching perk, making it easier to aim under fire using this weapon which we personally find really useful.

Check out the full review courtesy of PlanetDestiny below for the full lowdown and let us know if you have just purchased the Red Death today following Xur’s arrival.

How happy right now are you with Xur, is the Red Death really justified as a top-tier weapon in the entire game?