If you completed the 6 bounties Petra has been handing out this week then you should have earned the Queen’s Favor in Destiny, now it should be a matter of waiting for the Reef open time to collect your reward, unless you have problems. It isn’t that simple for everyone with a number of players reporting issues, as explained by some Product Reviews readers contacting us directly and stating they did all the bounties with their characters, but haven’t received the new mission or bounty.

This has led a few people to wonder if they missed out on the Destiny Queen’s Favor, as seen in the screenshot below. This basically tells you the Queen is very pleased with your service and offers you an invitation to see Petra in the Reef for your reward. Considering the House of Wolves expansion goes live at 10AM PDT, some players are waiting until the DLC is live to see if they are given the Queen’s Favor after the update allows for the Reef to be open. 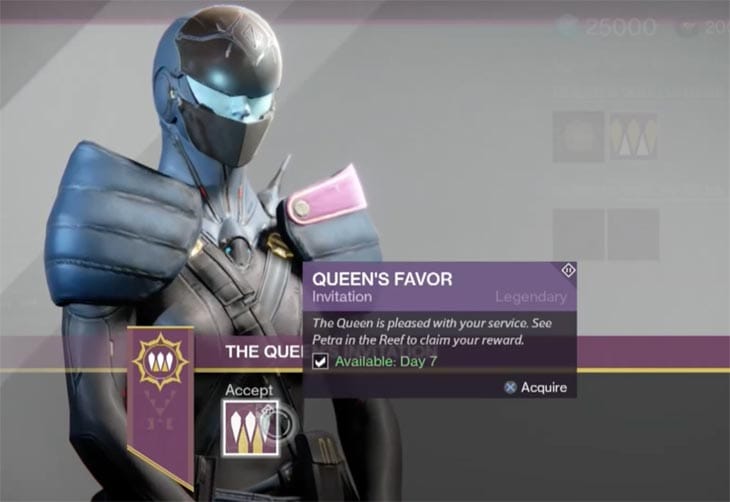 What time does the Reef open today in Destiny with House of Wolves launch? Most agree you should be able to collect your reward once the House of Wolves launch time passes. Bungie has confirmed you will be able to play the new Wolves expansion at 6PM in the UK, or 10AM PDT, and you need to head to the location seen in the screen below this article.

The situation isn’t so simple for those that haven’t received the Queen’s Favor in Destiny, even after completing all the bounties Petra gave out. As you can see within this forum post on Bungie’s support site, which has quite a few players complaining about not receiving the Queen’s Favor.

Bottom-line: It’s not clear how the Queen’s Wrath or Queen’s Favor will work in House of Wolves, so wait to meet Petra in the reef after the House of Wolves launch at about 10AM Pacific Time. Once the expansion is live, we should know exactly how this all works.