Moments ago we reported on a brief outage on Xbox Live. Now though, we have some other issues to tell you about as it looks like Destiny players are having problems with Destiny party chat not working on Xbox One.

This has been an ongoing problem with the game for a few days and considering Bungie has only just returned from their Holiday break, they may not be aware about the Destiny party chat and the fireteam chat issues.

As far as we’re aware, party chat on Destiny is completely broken and restarting the game doesn’t appear to solve the problem. You can see evidence of the problems that are clearly happening below with Destiny players taking to Twitter to complain to XboxSupport on January 6. 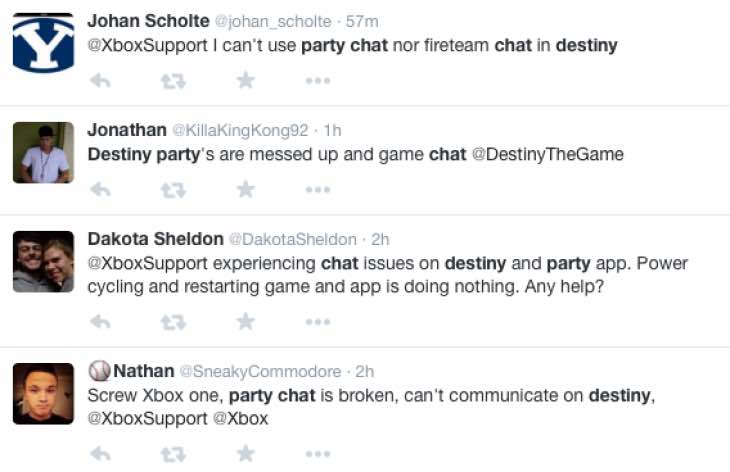 Unfortunately, there doesn’t seem to be an instant Destiny party chat fix at the moment as Xbox Support have offered no direct fix and instead suggest users to restart their consoles and try again.

As we said above, Bungie has only just returned to work so we may see some sort of official message from the developer regarding this later this week – keep your eyes peeled to Bungie Help.

If you have been having any issues with Destiny Party chat and Firechat chat not working on Xbox One or Xbox 360, let us know your experience below.

Did the problem fix itself automatically for you, or are you still without complete communication on Destiny right now?