We are again taking a look at some of the new Destiny Armsday Foundry weapon orders. This time, we have a Destiny Omolon Tuonela SR4 scout rifle for you to take a look at as it seems to have been one of the popular choices from Gunsmith Banshee this week.

If you have just placed an order from Banshee for this weapon, you’ll be pleased to hear that it looks like a very solid acquisition and a viable scout rifle to take into competitive modes.

Omolon Tuonela SR4 stats include an attack of 280, extremely high range and impact while the reload capability is a big plus point as well. Full Destiny Omolon Tuonela SR4 perks can be viewed here over at Destiny Tracker. 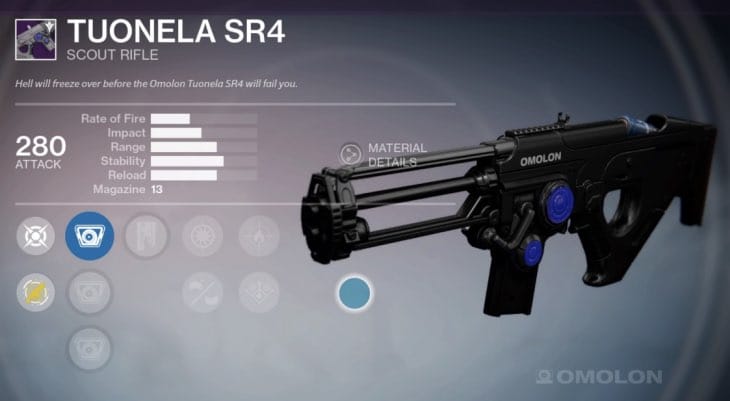 It also has one of the best designs that we have seen for a scout rifle in the game so far too, so for those that care a lot about aesthetics the Omolon Tuonela SR4 may be for you.

The weapon is still very new, so few details on it are available. However we have picked out two weapon reviews for you to take a look at which should give you an idea on whether the Armsday order was justified or not.

Watch the clips below and let us know your own feedback on the Tuonela SR4 in Destiny so far. For those that already have one from a previous Armsday order – are you loving it or not?