We have an important heads-up for Destiny players now, as Bungie has sent out word that Destiny servers will be down on Tuesday February 24.

Before you ask though, it isn’t to make way for the upcoming Destiny 1.1.1 update which we told you about hours ago. Instead, this is going to be standard maintenance which will happen server side and won’t change any gameplay aspects for now.

The important info you need to know with regards to Destiny maintenance times is that the game will be offline on Tuesday morning at 10am Pacific Time. 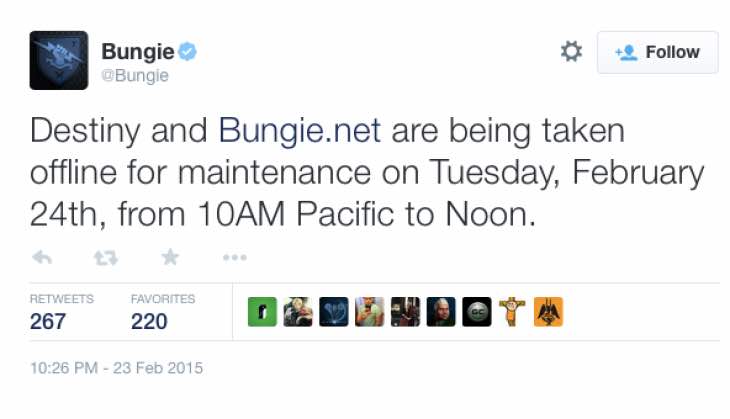 This means for those playing on eastern time, that’s 1pm in the afternoon and 6pm for those playing in the UK. For those asking when the Destiny servers will be back up, Bungie expects maintenance to last two hours – so check the servers again at 12pm PT, 3pm EST and 8pm GMT.

Hopefully there won’t be any further issues as in the past we’ve seen maintenance go on well past the intended schedule times.

Let’s also hope that this maintenance will allow Bungie to deploy the 1.1.1 update before the end of the week, just in time for another appearance from our friend Xur.