It didn’t take long at all for the first team to successfully complete Destiny’s King’s Fall raid on hard mode. The raid went live on Friday and now Bungie has officially revealed the team which was the first in the world to achieve completion before anyone else.

Without further ado that team is Clan Forever LivE who managed to clear hard mode in just over an hour. Bungie made the announcement on their Twitter, while you can also see their clan page over at Bungie’s website here showing the ‘World’s First’ achievement. 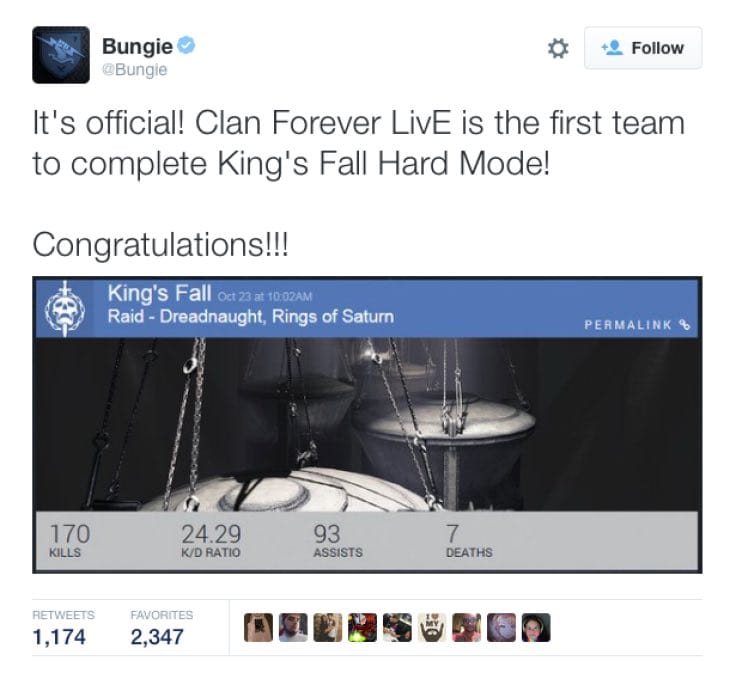 What players want to know though is how this team managed to do it and in a very quick time. We’re not sure if this is the world record King’s Fall hard mode time, but let us know if your team has managed to complete it quicker than 90 minutes.

Right now, attention has turned to some of the King’s Fall loot on offer – Anguish of Drystan, Smite of Merain and Doom of Chelchis to name a few.

Let us know your experiences with the raid on hard mode so far and how you think it compares to Crota’s End. Have you managed to beat it yet with your team or are you still trying?