We know a lot of you have been asking where is Destiny’s Iron Banner for September 2015 after a long period of absence. If you haven’t heard, Iron Banner isn’t starting this week and now we have some information from Bungie to give you on this.

Usually Iron Banner would start towards the end of the month, but with all of the action regarding Taken King and the King’s Fall raid – Lord Saladin could perhaps be afforded a small vacation this time.

Bungie has sent out word via Deej to all guardians that Lord Saladin will be arriving soon – but they are not saying when just yet. 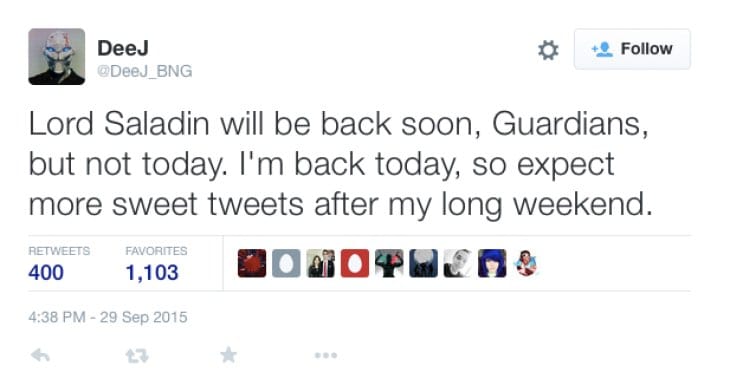 Despite all of the ongoing excitement regarding the Taken King content, it’s still quite fascinating to see just how loved Iron Banner really is – if Bungie didn’t realise the popularity, they certainly do now.

With Lord Saladin not appearing this week, it means that we could see a shake up in the usual Destiny Iron Banner schedule for October 2015.

We’ll keep you posted as soon as Bungie are ready to go live but judging by Deej’s Tweet above that could happen at any moment.

What are you hoping to see from the next Destiny Iron Banner from Lord Saladin?


Update: For those wondering why Iron Banner hasn’t started yet, Bungie are first waiting to deploy the Destiny 2.0.1 patch – details here.