Just hours ago, we told you that Bungie had gone live with the planned Destiny 1.0.3 patch. Now, attention has shifted to the Destiny Iron Banner Reforged start time for November 18, as Bungie has promised that it will be going live very soon.

Unlike previous Iron Banner events for Destiny though, Bungie isn’t willing to give an exact time for when the new content will be available. At the moment you can see that the preparations have already been made in the game after the 1.0.3 patch, but Bungie has clarified on Twitter that they still need to press the green switch to start proceedings at the Crucible.

Reforged is the key factor this time around, as once again Bungie has made some big changes to the event. The key details are listed here on the Iron Banner section of Bungie’s website – including a level cap of 20 and defense rating affecting attacks as two examples of changes. 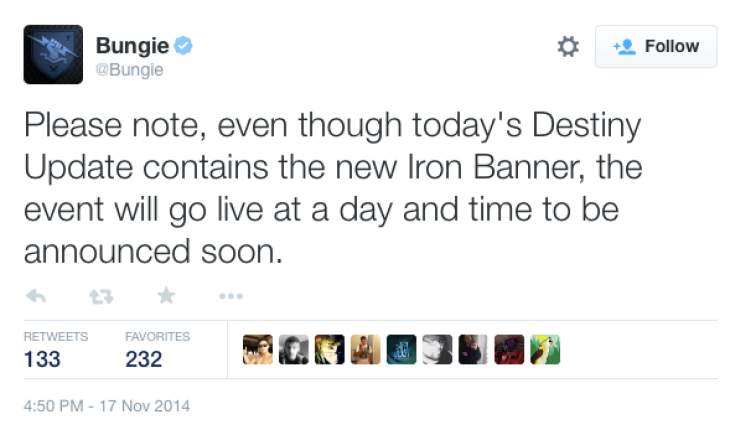 Just like last time, the Destiny Iron Banner November 18 event also brings back Lord Saladin, who will have some new exclusive level 30 Gear for you to get your hands on. You’ll need to improve your event standing by completing Iron Banner bounties to have a chance of obtaining the new wares.

As mentioned above, the latest Iron Banner end time for Destiny is on Monday November 24. We are expecting the content to go live at any moment so stay tuned to your game to play at the first opportunity.

Let us know if the new Iron Banner reforged event is live on your game yet, or if you are still waiting.