Earlier on we told you about some planned downtime for Destiny, as the Destiny servers will go down today on Tuesday for an official hot fix from Bungie. After that though, it’s every man for themselves as the Destiny Iron Banner event start time is almost upon us.

This is going to be an unmissable PVP event, especially for those that have been hoarding legendary and rare gear since the launch of the game last month.

In the Iron Banner event, there will be no limitations as to what you can bring into battle so those that don’t have levelled up gear are going to need some good luck indeed. 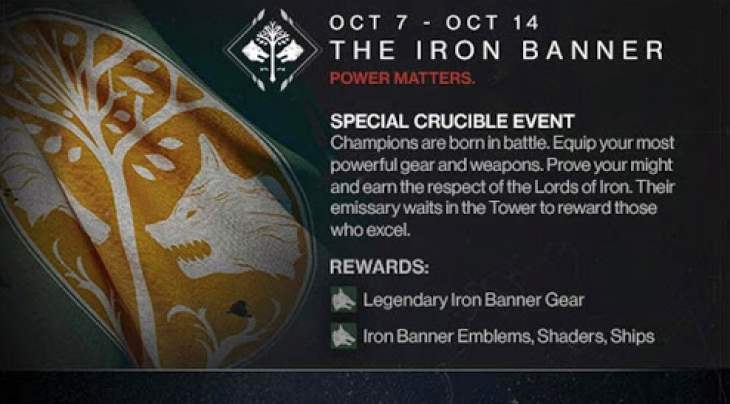 The Iron Banner event will take place in the Crucible and prizes on offer include Legendary Iron Banner gear, as well as Iron Banner emblems, shaders and ships.

Fortunately, there’s still time to get into shape before the planned downtime at 7am Pacific Time, which Bungie says will last a few hours. The Queen’s Wrath event is the perfect opportunity to get hold of some last minute Legendary gear and ensure that you can still compete on some level once Iron Banner begins.

We’re assuming that the Destiny Iron Banner start time will take place immediately or almost after the hot fix has been applied, so prepare yourselves accordingly.

The question is, how prepared are you for the event? Let us know what kind of gear you are rocking and your predictions for how well you think you will do.