During a general Destiny update from its developers we were treated to an interesting image that revealed to us the Destiny Iron Banner event date, as well as those all-important times and even the rewards.The image for the Iron Banner shows the Special Crucible Event will run from October 7th to the 14th, where champions are born to do battle.

During the event you will need to equip your most powerful gear and weapons, where you will have to prove your might, while earning respect of the Lord of Iron. Don’t get too complacent, as it is not an easy task to fulfill. Their emissary is waiting in the Tower ready to rewards those who deserve it. 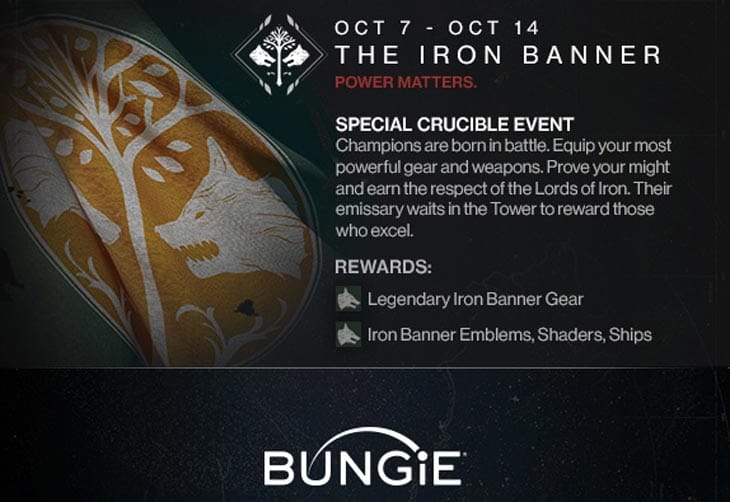 Speaking of those rewards earlier, there are two in all; these are the Legendary Iron Banner Gear and Iron Banner Emblems, Shaders and Ships. This is certainly something for Destiny fans to look forward to, just hope you prepaired, as you don’t have long to prove yourself.

Having said that, you will already been earning your worth during the current Queen’s Wrath event, which is due to end on October 6th. This means you have no time to take it easy, seeing as though the Iron Banner event begins the very next day. The biggest difference with these two events are that the former ran for two weeks while the latter will run for just the one.